Arts and shows | Education | Learning | UW and the community

The artist Benjamin Gale-Schreck is lying on his “cradle-coffin”. It invites people to lie on it and feel the sounds and vibrations it creates. Much of his work relates to experiences with his family, he said, in El Paso, Illinois, where his late father established an arts center.Pierre Kelley

Throw in, ladies and gentlemen, for student sculpture and paintings, from introspection to interactivity with a kind of sideshow feel, intriguing photos and design pieces that seek to blur the world of data and help in decision making.

This is the annual exhibition of thesis work of 14 graduate students from the University of Washington School of Art + History of Art + DesignMaster of Fine Arts and Master of Design programs. The art and design works from the exhibition are on display at the Henry Art Gallery until June 26.

Bryan Allen Robertson“Look Out, Kid, They Keep it All Hid,” a painting made up of dozens of layers of vinyl and oil paint, uses a Bob Dylan song as inspiration and brings the sense of a fair to county or similar Americana – a notion chillingly underlined by the presence of a large handgun. A second painting by Robertson titled “Johnny’s in the Basement Mixing Up the Medicine” continues the Dylan-inspired “Subterranean Homesick Blues” series.

On a nearby wall, Heather NibertThe moody urban scene painted in “Sky View” reveals a dark, dripping night view from the towers of Seattle’s Columbia Center.

“It’s a coffin-cradle – a kind of storytelling device”, Benjamin Gale-Schreck says of the wooden structure in front of him, in which he invites participants to lie down, listen and feel. Gale-Schreck was holding a small sheet of slate rescued from a 19th century railway station.

“I kind of load it up — or conjure the system by sitting on that stump and rubbing the slate and calling people to participate,” he said. It creates a soundscape by moving the microphone across the slate which is tuned to the deep vibrations felt by the reclining participant. In doing so, he tells a soothing story, as he would to one of his two children. 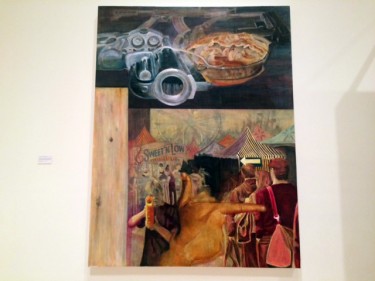 “Look Out, Kid, They Keep it All Hid,” by Bryan Allen Robertson, as part of his Bob Dylan-inspired Subterranean Homesick Blues series.Pierre Kelley

“A lot of my job is to take things that I learned from my father, not only to preserve them, but also to pass them on to my children,” Gale-Schreck said.

Paul BaughmanThe tall wooden structure, aptly titled “Balance”, looks a bit like a massive seesaw. The piece involves the artist himself in the performance, as he carries his own weight in black clay from side to side of the piece. If it falls – and it does, he says – the clay stays where it landed.

Baughman says the piece reflects a kind of “deconstruction of my own position in society.” With this piece, he said, he attempts to “understand the role of the individual in relation specifically to agency, power and change”.

Sculptor Anna Mlasowsky“Borderlands” by includes clear plastic molds vacuum-formed from obsidian rocks, a video by the artist, and an accompanying poem that viewers listen to through headphones. “What is expressed is a kind of idea of ​​unifying oppositions through a process of change,” she said.

Photographer Sarah Skwira said his striking large-format photos are meditations on the everyday domestic world with the common theme of “aging and decay – something that really appeals to me”. 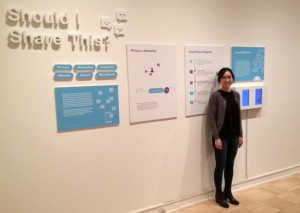 “Should I share this? a hypothetical mobile app by Jaewon Hwang, is a social media filter that would help users better control their posts.Pierre Kelley

Now, after seeing such innovations, should we express our feelings about them on social media? Jaewon HwangThe design piece “Should I share this?” seeks to provide an answer. Hwang has designed a hypothetical app she calls a social media filter that looks at your old posts to let you know if the post you’re about to share is appropriate. In her artist statement, she wrote that the intention is to “give users more control without cluttering the sharing experience.”

Asked what prompted the idea, Hwang replied, “My own mistake!” Over the years, out of a desire to be nice, she has befriended people on social media. “Then a few years later I ended up with 500 friends, and most of them I’ve never met in person.”

Catherine Lim also used design to enhance and contribute to his practical and realistic play, “Engaging in Aging”. She spent a few months visiting a local senior center and encouraging ideas to address the issue of social isolation, which many residents experience.

“The idea is based on the belief that everyone is creative and has something to offer,” Lim said. With the center’s seniors, she created a set of intervention strategies to address social isolation and helped residents with a website to organize outings. The key to the project’s success was, as the title explains, engaging with elders and respecting their ideas. 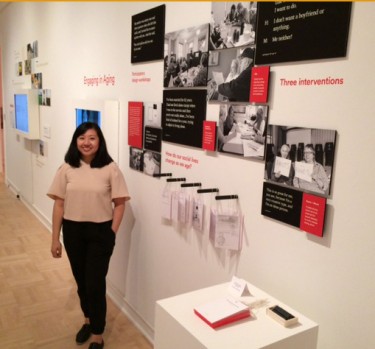 “Engaging with Aging”, a design project by Catherine Lim. She worked with residents of a senior center to bring out their ideas on how to contribute to the social isolation, which residents of these facilities often feel.Pierre Kelley

“I think the important thing is that if I went in and observed, did interviews and made assumptions, I probably would have found different things,” Lim said, adding that the attendees were “very generous with their time and from their points of view.”

Geoff Gray studied the principles of visual perception to create “Navigating 3d Scatter Plots in Immersive Virtual Reality,” which uses a virtual reality headset to help the viewer navigate and “see the overall structure” of data in a three-dimensional world . “It’s like an exploration tool,” he says.

Other artists showing their work were Ben Dun, Chad P. Hall, Joe Sparano, Erin Elizabeth Wilson and Ellen (Jing) Xu. All student artists were encouraged to treat this show as a professional installation.

During the press preview, Jamie Walker, Director of the School of Art + Art History + Design, welcomed and chatted with visitors; and Jes Gettler, designer and principal curator of the Henry’s exhibition.

“It’s indicative of what we do,” Walker told those gathered for the exhibition’s press preview. “We support artists and designers as individuals engaged in independent creative research.”

For more information about the exhibition or the Henry Art Gallery, contact Dana Van Nest, Associate Director of Marketing, Communications and Public Relations, at [email protected] or 206-616-9625.