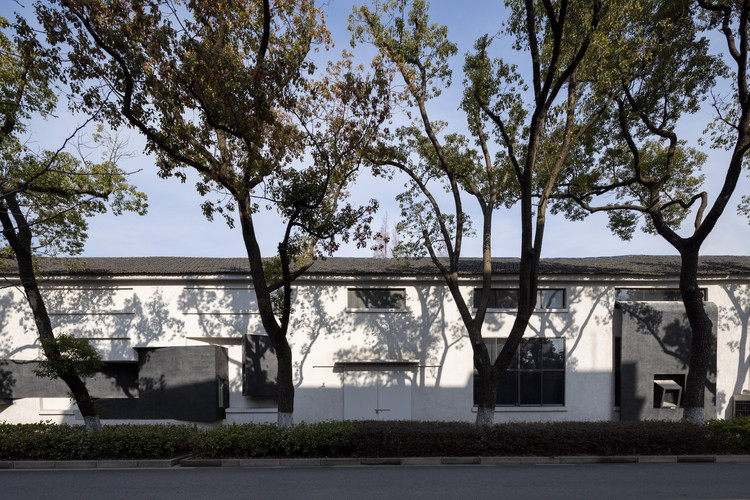 Text description provided by the architects. We were commissioned by Doozy Access Gallery to remodel an industrial warehouse located off Longwu Road in Shanghai. At the same time, the group of artists Martin Goya Business was invited during the renovation to experimentally organize a first art exhibition on the construction site. This is a warehouse renovation project with an area of ​​500 square meters. The existing warehouse was once a glass production factory with two rows of massive concrete beams running the length of the building inside. Similar to most factories striving for spatial efficiency and economy, the building’s facade reflects its internal rhythm by repeating window frames in each bay. In this project, however, we try to disrupt this rhythm by weaving a completely different spatial language into it and creating the facade in a fragmentary, incomplete and bizarre way. Three spatial objects are designed to fit into the existing facade. We deliberately make the language of these objects incoherent but spatially connected in the narrative with the internal scene (showroom) and ‘black

Object 1: Snout lens – Degas’ look behind the scenes. ‘Similar to the antique camera, the object has a lens emerging from a black curtain to spatially connect the visitors and the internal “backstage”.

Object 2: Perspective Path Volumes. Following the lens concept of the first object, we attempt to solidify the invisible volumes of the perspective paths to the internal stage (showroom) and insert these materialized volumes into the existing wall like a foreign language to disrupt the rigid facade. of origin.

Object 3: off-axis stacked volume. Finally the main entrance. We seal the original portal but preserve its frame and spatial depth, creating contrast with the position of our designed entry object. Passing through the low cave-like ceiling hole, the large interior space is revealed.

Black curtain. The large hall space is imagined as a performance theater, the front stage is the exhibition hall, while the office and photography space becomes the backstage, between the black curtain is the division. Originally, a colorful black curtain was designed to be made of various material fragments and black fabric textures such as cotton fabric, PVC fabric, etc. But the idea of ​​a fabric curtain was put on hold when the curtain structure was erected. The structure with the curved edges is strong enough to imply the relationship between the front and back spaces. Meanwhile, the existence of the structure triggers the temporary character and the flexibility of the use of space, which is much more significant than the simple division of the curtain.

Interior photography took place after an art exhibition. We deliberately recorded the trace of the use of space by not removing any existing elements as a gesture of confrontation against excessive refinement and pretentious magazine photos. During the construction, Martin Goya Business (group of artists) carried out an experimental art practice by painting graffiti on the entire incomplete interior surface (wall, floor, column, etc.) with graffiti. After the exhibition, all graffiti was completely erased and all surfaces were repainted white. The whole process has become an extraordinary performance art.