The Art Gallery of New South Wales in Sydney has revealed images of its extension designed by Pritzker Architecture Prize-winning architecture studio SANAA, being built ahead of its December opening.

Named Sydney Modern, the extension occupies a cluster of rectilinear pavilions that slope down the sloping site towards Sydney Harbour’s Woolloomooloo Bay.

The gallery has revealed construction images of the SANAA-designed extension, which they announced will open to the public on December 3rd.

Located next to the Art Gallery of New South Walesthe interlocking pavilions will be connected by a multi-level atrium with walls of glass that offer views of the surrounding landscape.

Sydney Modern was designed to stand in direct contrast to the museum’s 19th century neoclassical architecture, with the two buildings separated by a public art garden.

The extension will expand the museum’s formal exhibition space from 9,000 to 16,000 square meters, with a range of galleries dedicated to 21st century art as well as installation areas in the circulation spaces. 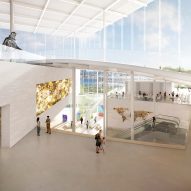 Below the extension will be an underground art space located in a converted WWII naval oil tank that sits beneath the building.

The 2,200 square meter gallery space will have seven meter high ceilings and will be able to accommodate large-scale commissions.

According to the museum, displays of Aboriginal and Torres Strait Islander art will be central to the expansion, with works featured at the entrance to Sydney Modern as well as in a dedicated gallery.

Tokyo-based architectural firm SANAA was founded by Kazuyo Sejima and Ryue Nishizawa in 1995. Since then, the firm has undertaken various international museum projects, including a recent design for the Shenzhen Maritime Museum which will be formed from a cloud-like structure with a trussed louvered roof.